Not sure if this is in the right place or not since the car technically isn't a Kei, but I think it's close enough that it counts.

So, today I picked up my new future daily runabout, a Perodua Nippa L201 (also known as a Kancil in Malaysia). For those of you that don't know, the Nippa is effectively a Daihatsu Mira L201 with Daihatsu's 850cc ED-20 three cylinder engine (also found in the L501 UK spec Cuore and L601 UK spec Move). The car is a 1999 EX model, which is as basic as it gets. No remote central locking, no power steering, not even a rear windscreen wiper. However, it has only done 32,000 miles and was £160.

The Nippa/Kancil was manufactured by Perodua in Malaysia, after production of the L200 Daihatsu Mira ended in Japan when they released the L500 series. However, the cars continued to be built, with production being moved from Japan to Malaysia, under license by Perodua. The engines and gearboxes were still supplied by Daihatsu though.

The car has had a somewhat interesting history. After doing 32,000 miles, it was parked up in a field and left for several years. 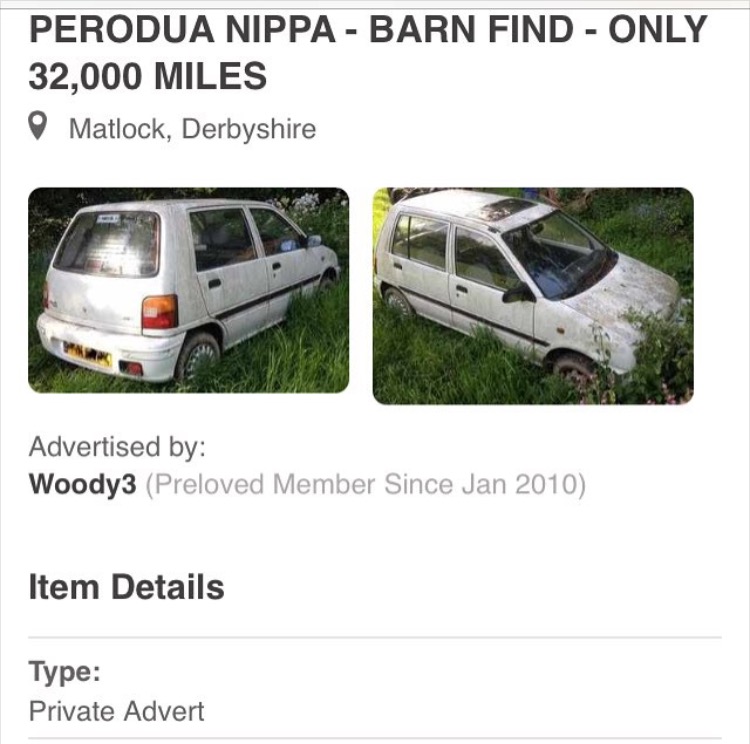 It was then dug out, cleaned up a bit and put up for sale. 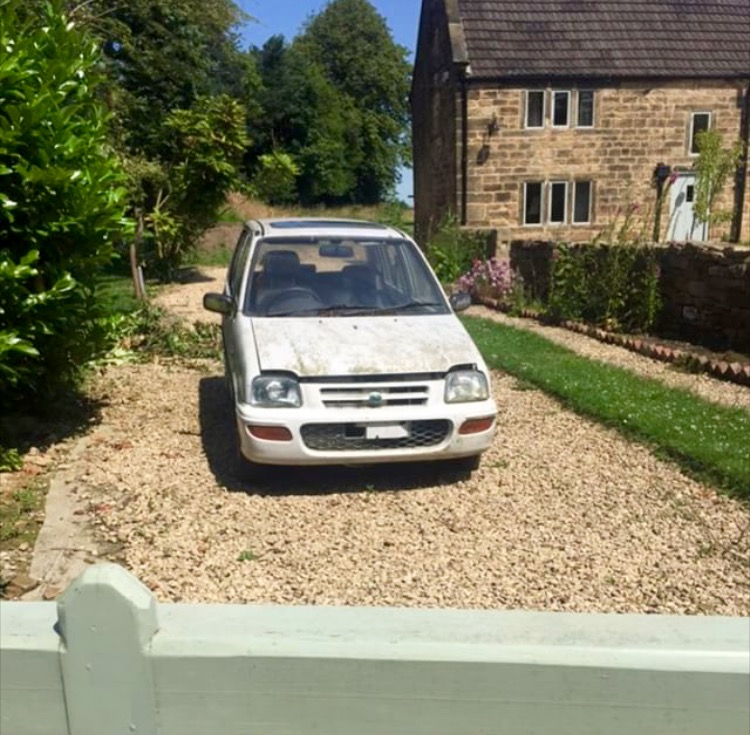 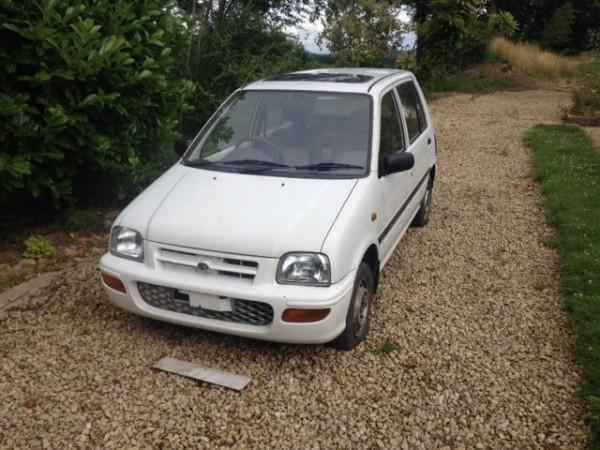 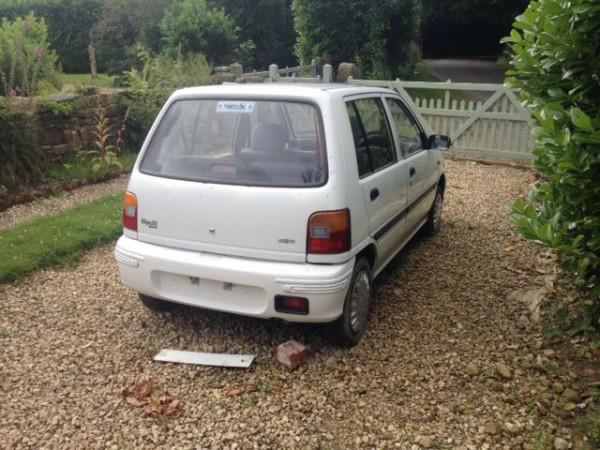 I was tempted by it previously, but couldn't justify travelling to Derbyshire to collect it. Before I knew it, it was sold.

I then found it for sale again, this time with a red one. It turns out that the car was bought, put in a lock up and left, and never run on the road. 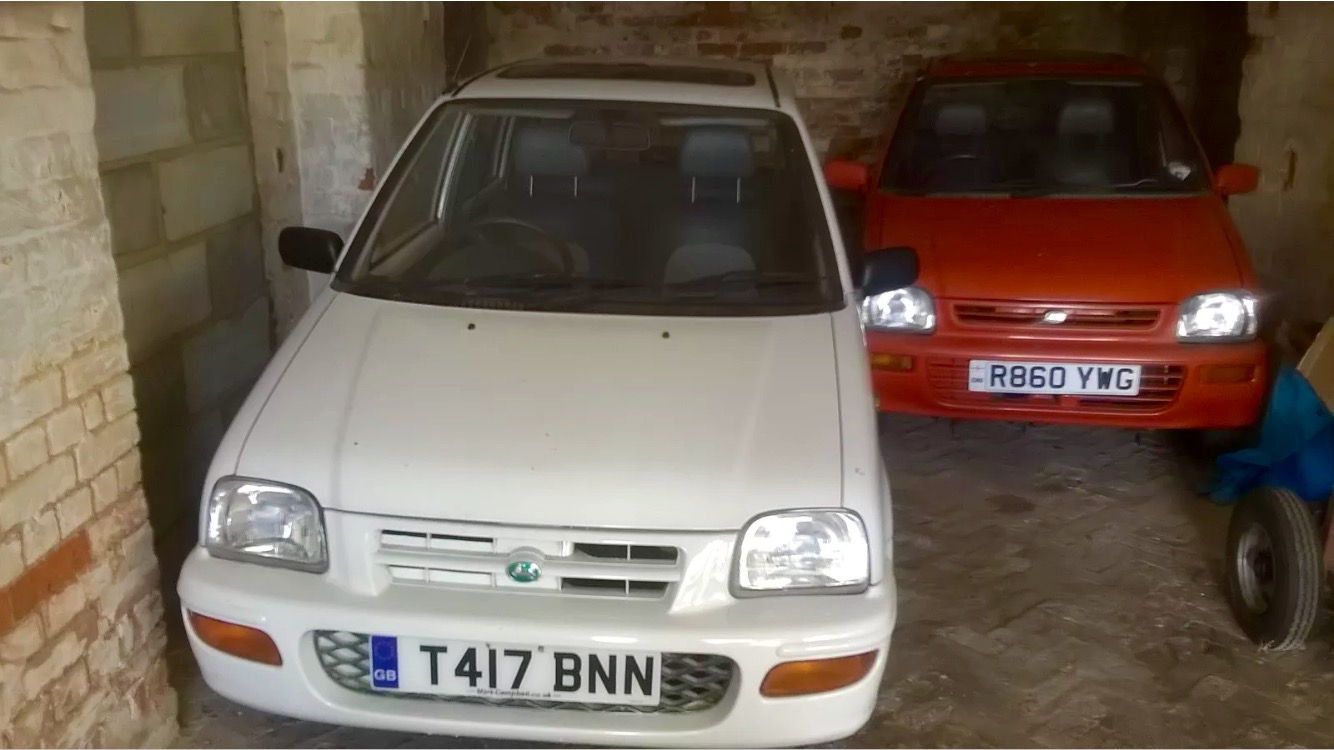 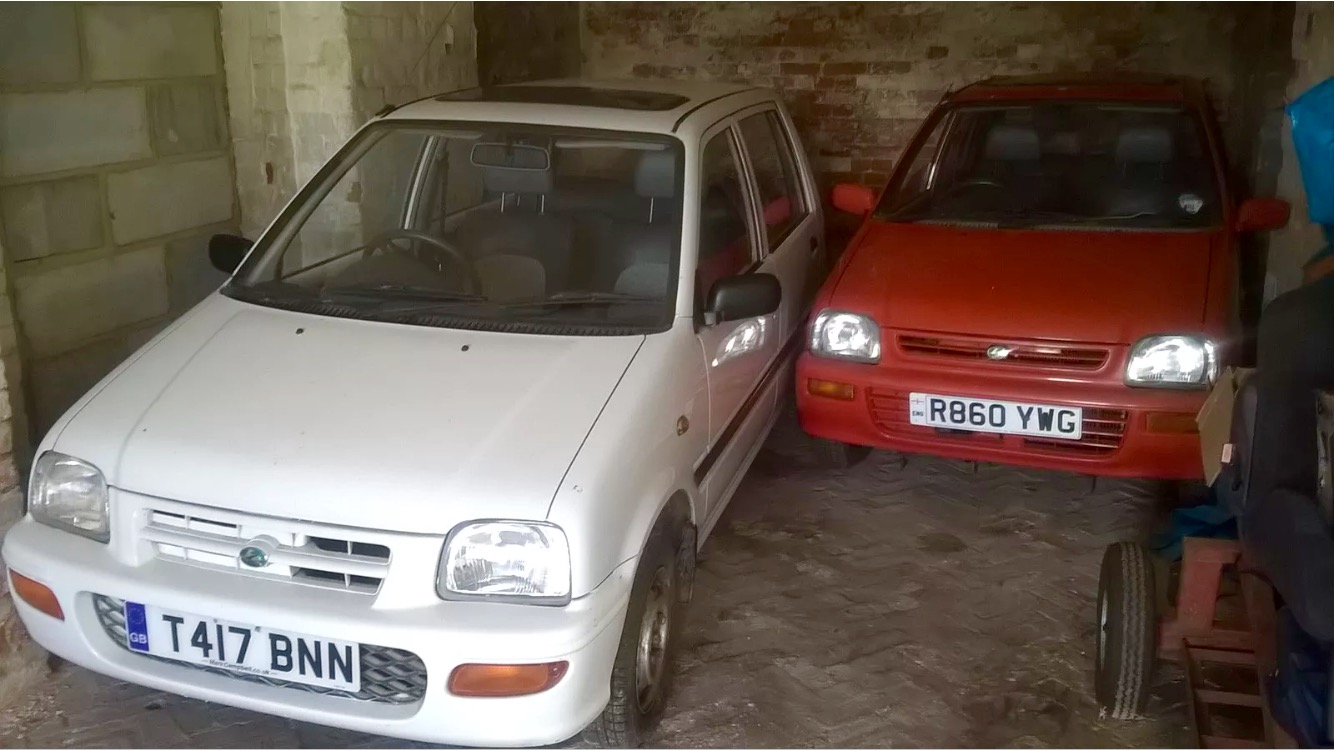 After being advertised for a few months with nobody taking it, the for sale advert was removed. I assumed the car was sold, however upon contacting the seller, I found that it was still available. And significantly closer to home.

So today, myself and a friend went to collect it, handed over an entire 16000pence and it was mine. Bought in the dark without being driven, but it did fire up immediately (with the help of a jump pack). 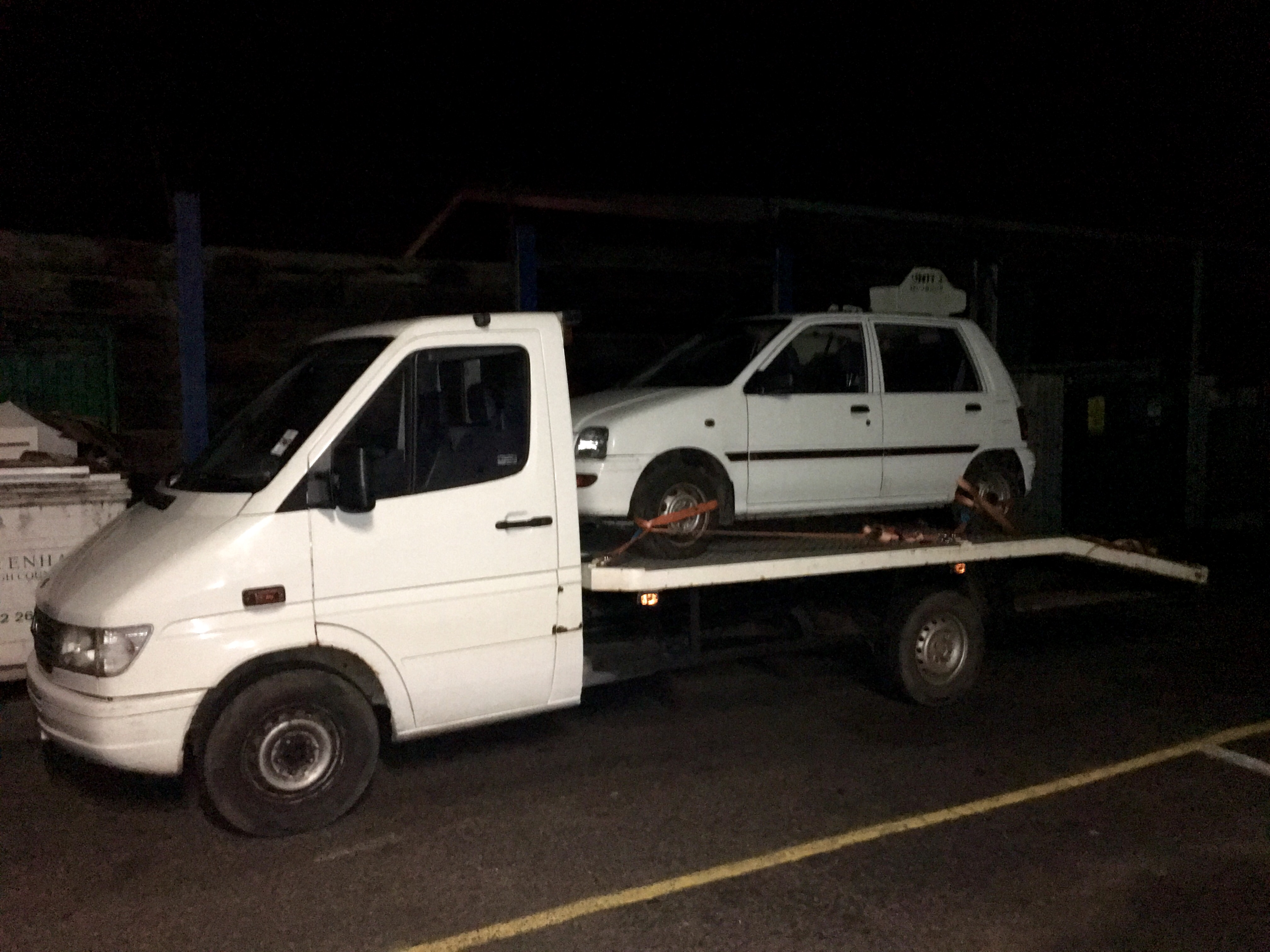 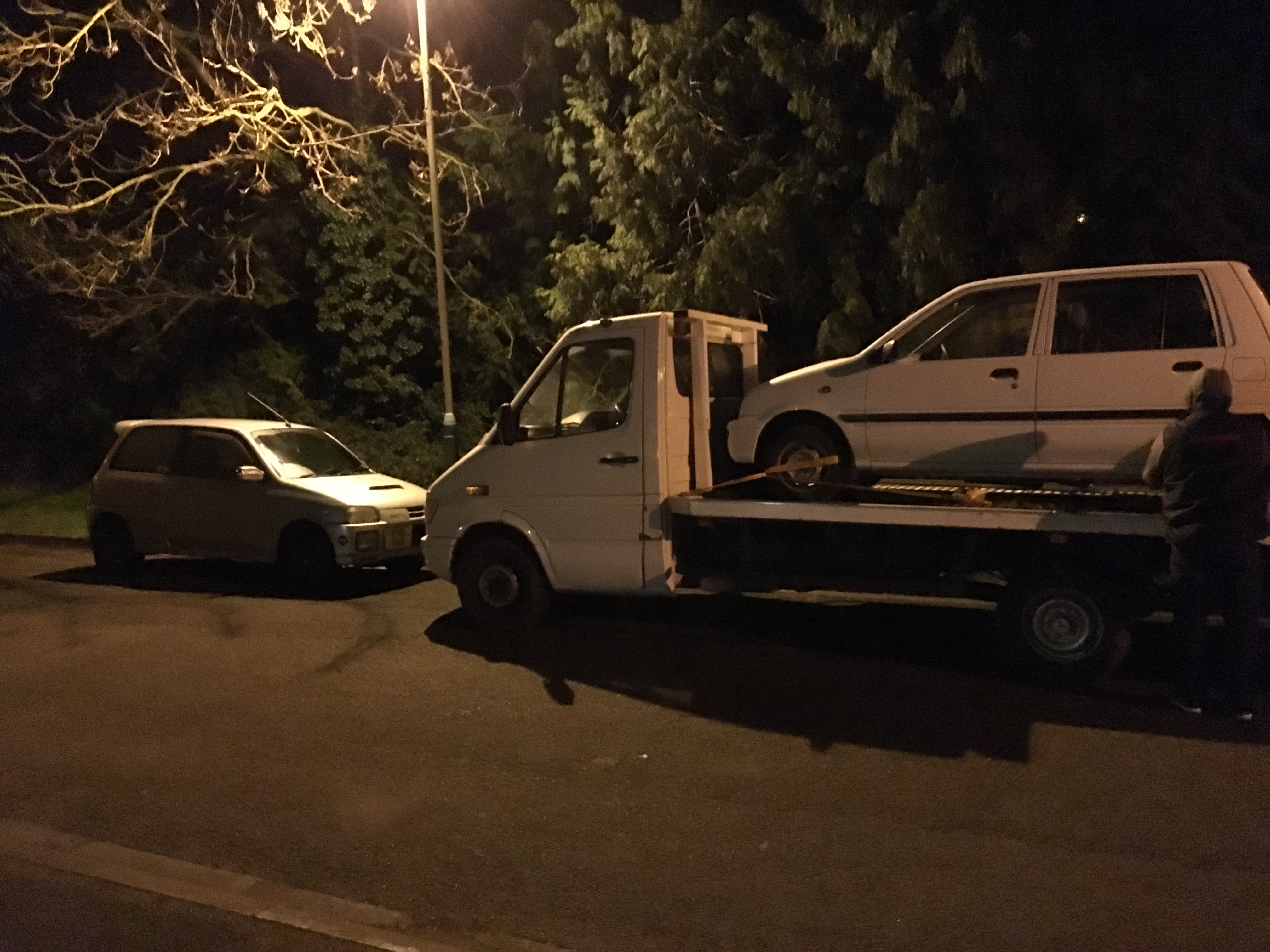 The plan for this car is to get it on the road again before my insurance on my Mira is due for renewal next month. Then, I can concentrate on the Mira without having to worry about being without a car for however long it takes.

The car is currently in a bit of a state though. The exhaust is split in two, and it needs new tyres. The exterior isn't exactly the cleanest, and the interior is rather grotty.

It needs a V5, MOT and tax, and most likely a full and thorough service. Plugs, air filter, oil and filter, fuel filter, coolant, gearbox oil, brake fluid, pads, discs and timing belt are all to be changed, and the exhaust will be welded up temporarily until I find a replacement. In terms of wheels/tyres, I'm going to be putting a set of standard L500 Avanzato wheels on it, just to make it look at least a little better.

Thanks Andy. I'll be honest and say that the car looks pretty poor in the daylight. Small surface rust spots all over the place. But, on closer inspection and a quick hose off, the chassis is mint, so I'm happy with that.

That's the important bit to be rust free.

Oh and is that a bit of metal fencing being used as grille mesh?

A boulder could get in through those holes.

It's the standard facelift grill! It's all plastic.

I believe the bumpers never used to be colour coded... Especially since I took the hose pipe to them earlier and the paint began to flake off

Also had a look at the DVLA's website and found that the car hasn't been on the road since September 2006. So it's been stood for 9 and a bit years...

As said on my fb page happy to help you whenever you are ready on this, actually looking forward to the end result as even for a quick clean by previous owner it looks to have come up quite well.

Unity of minds, unity of hearts, one sole sensation, no longer a coincidence, Overwhelming energy channelled, through universal language allows the personal legend to unfold......

I'll be honest, progress will be very slow on this. My Avanzato will take priority, of course.

Gave the car a quick clean today to see the condition of it a bit better. Even though it had previously been cleaned since sitting in the field under the tree, there was still a significant amount of grot and grime covering the car. 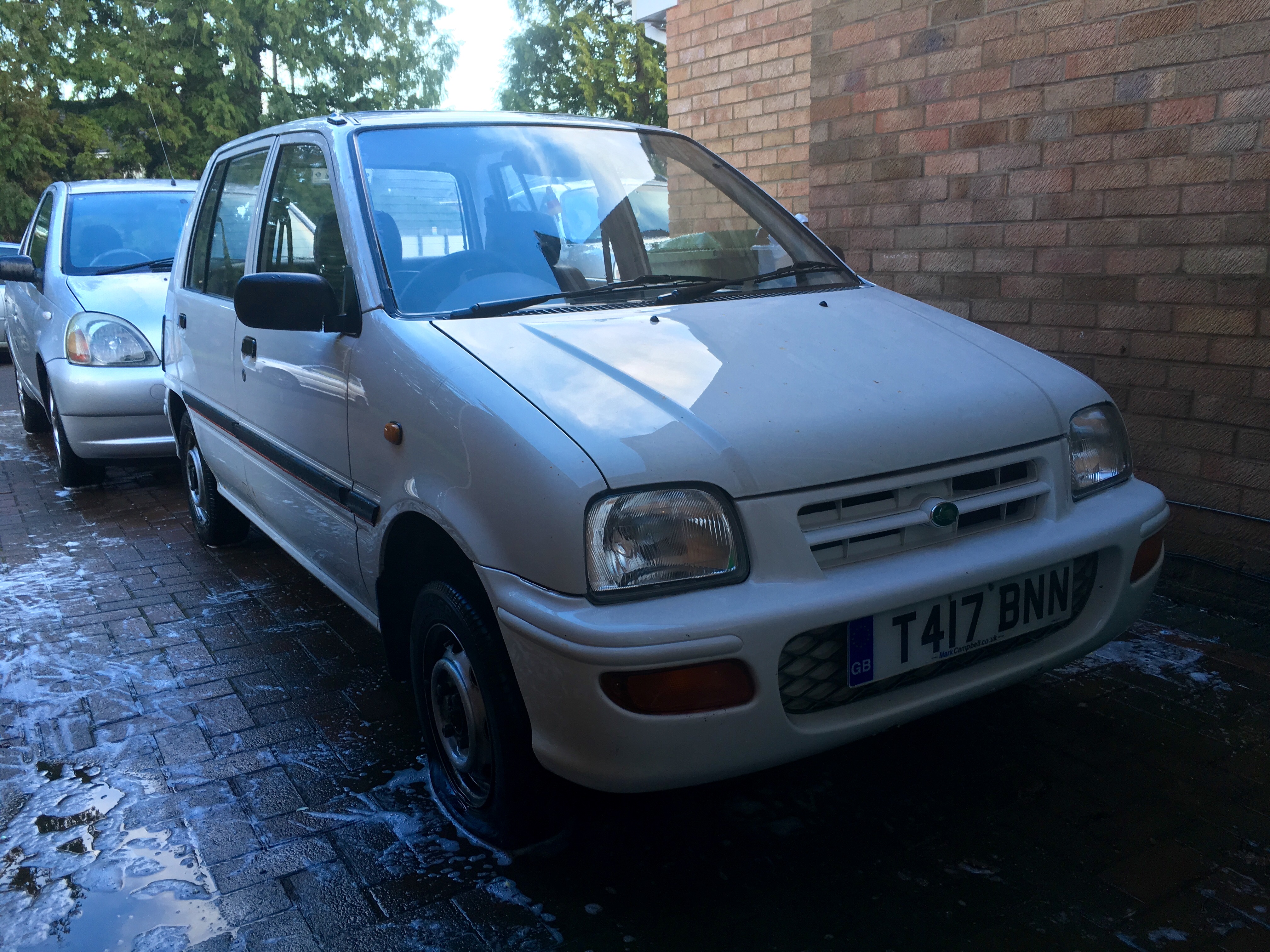 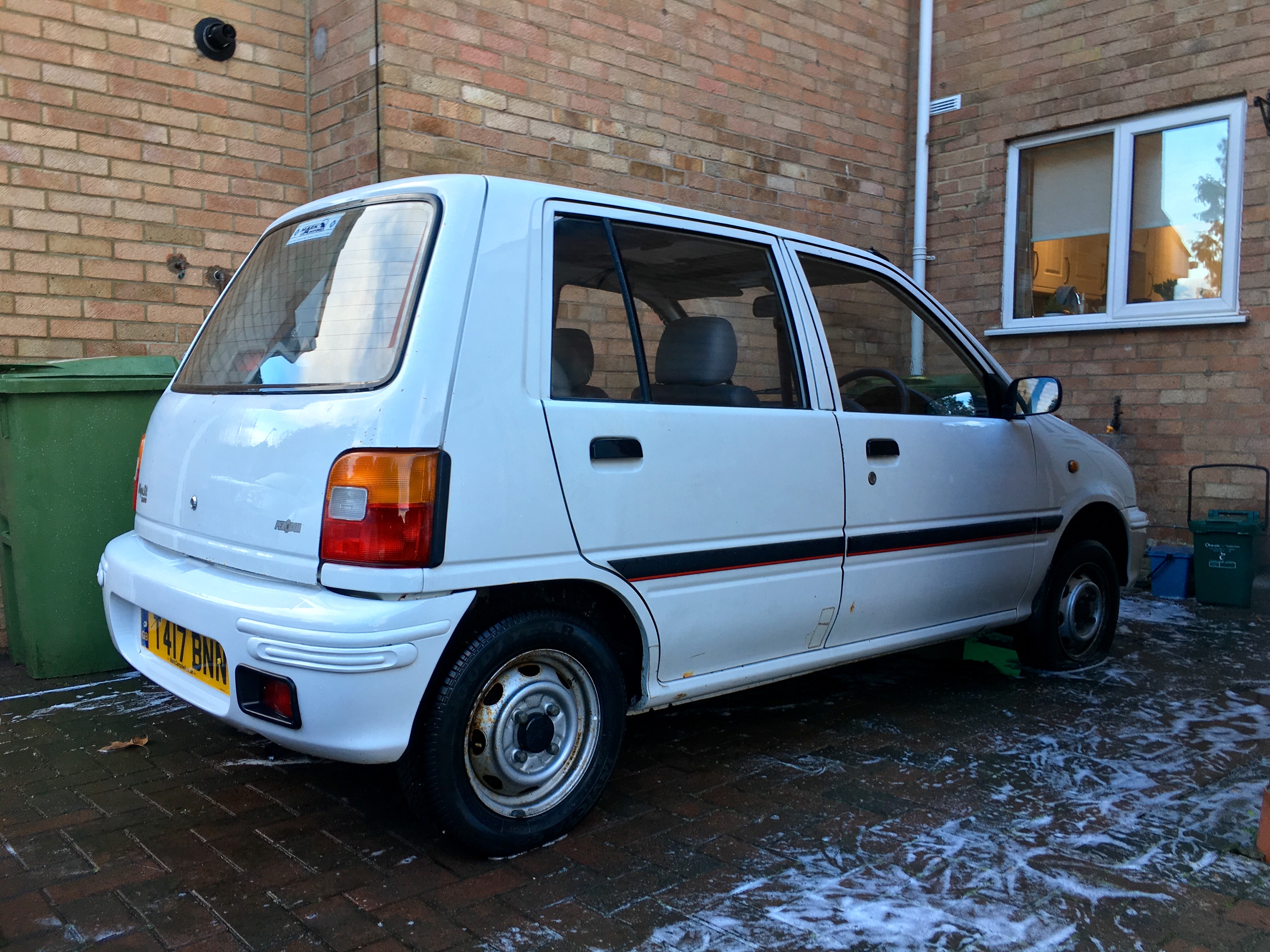 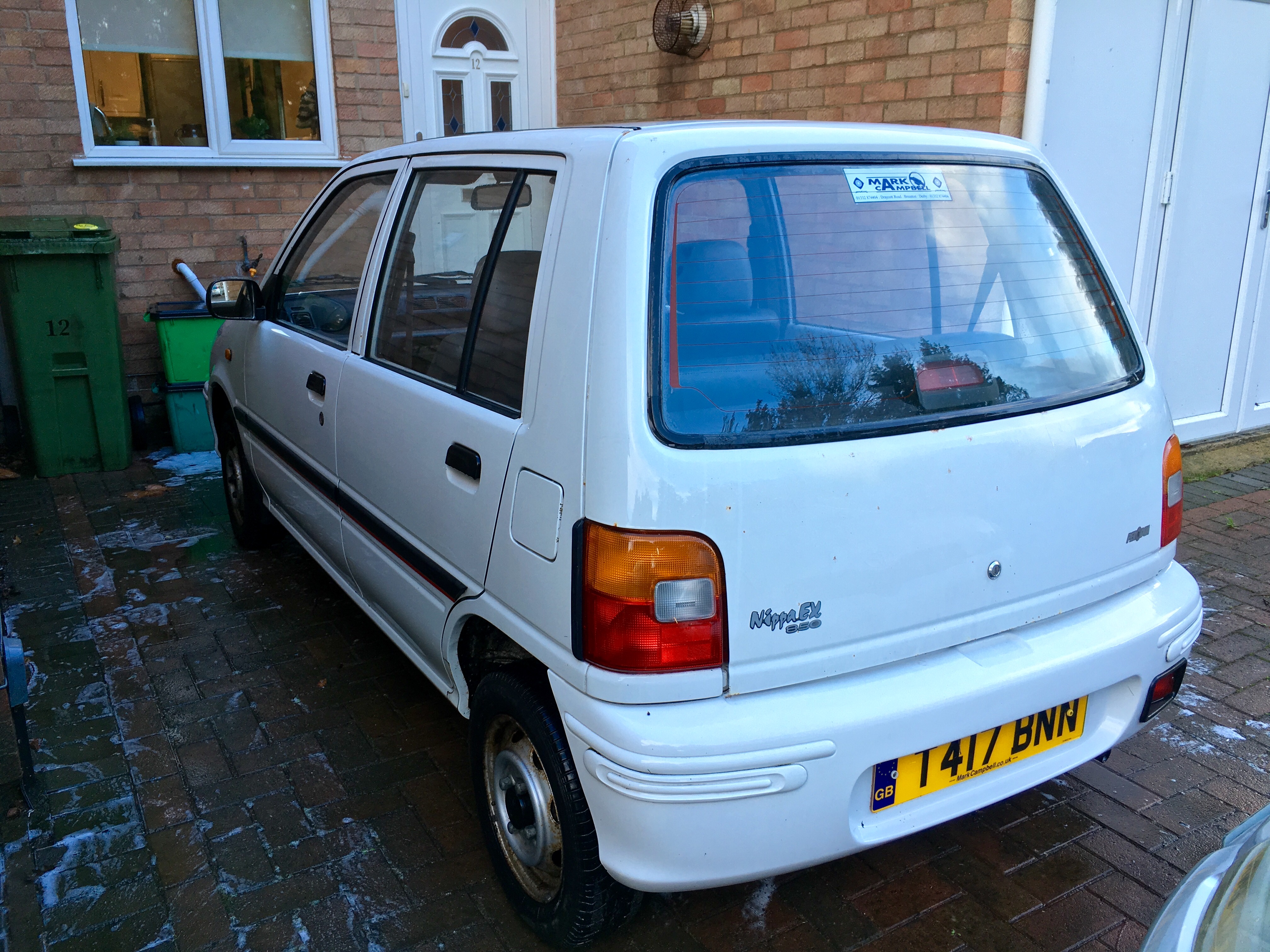 It came up okay. However there are specs of surface rust all over it. I'm guessing that since it's a budget car, the paint was put on as thinly as possible, to save money. 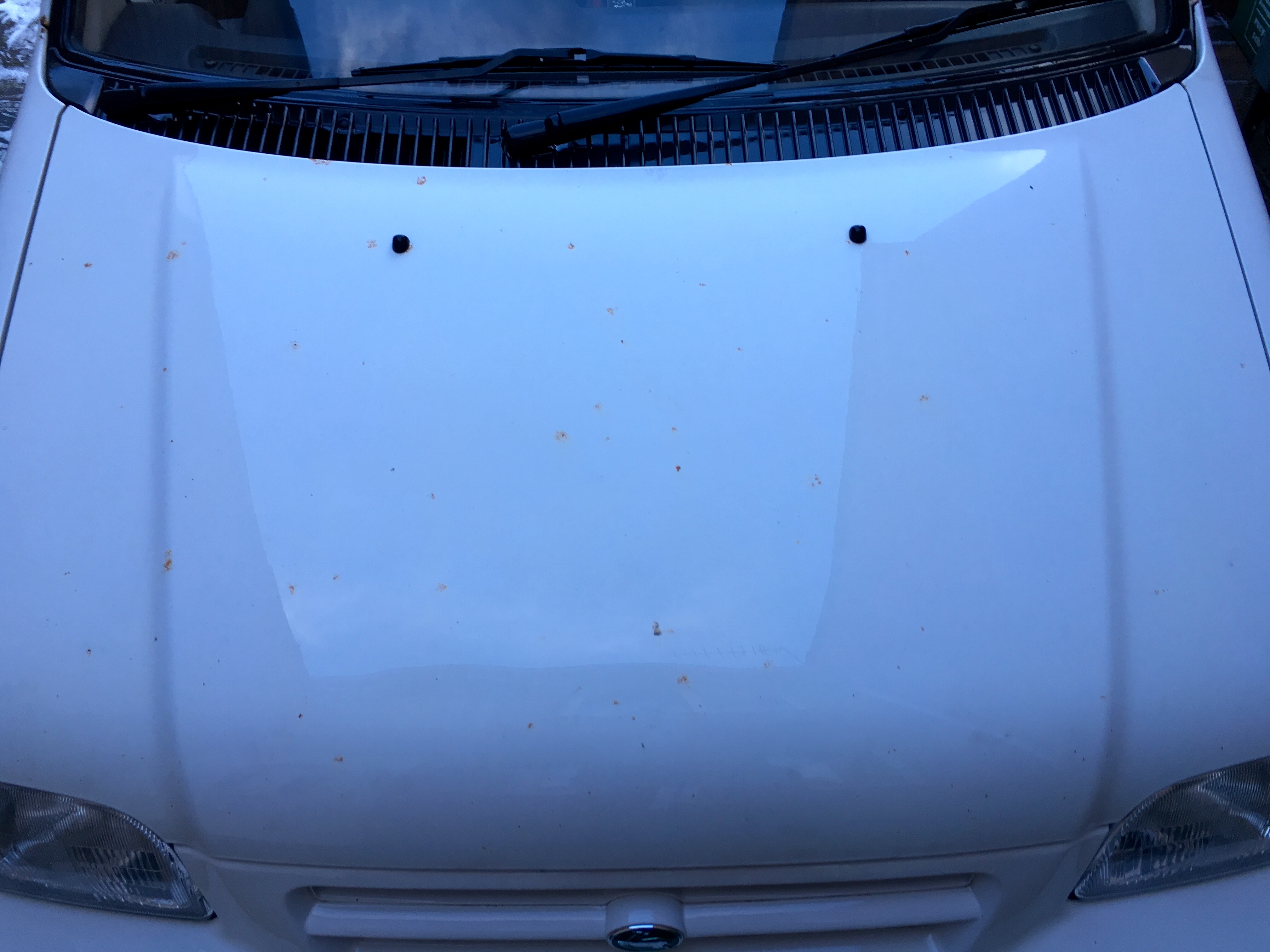 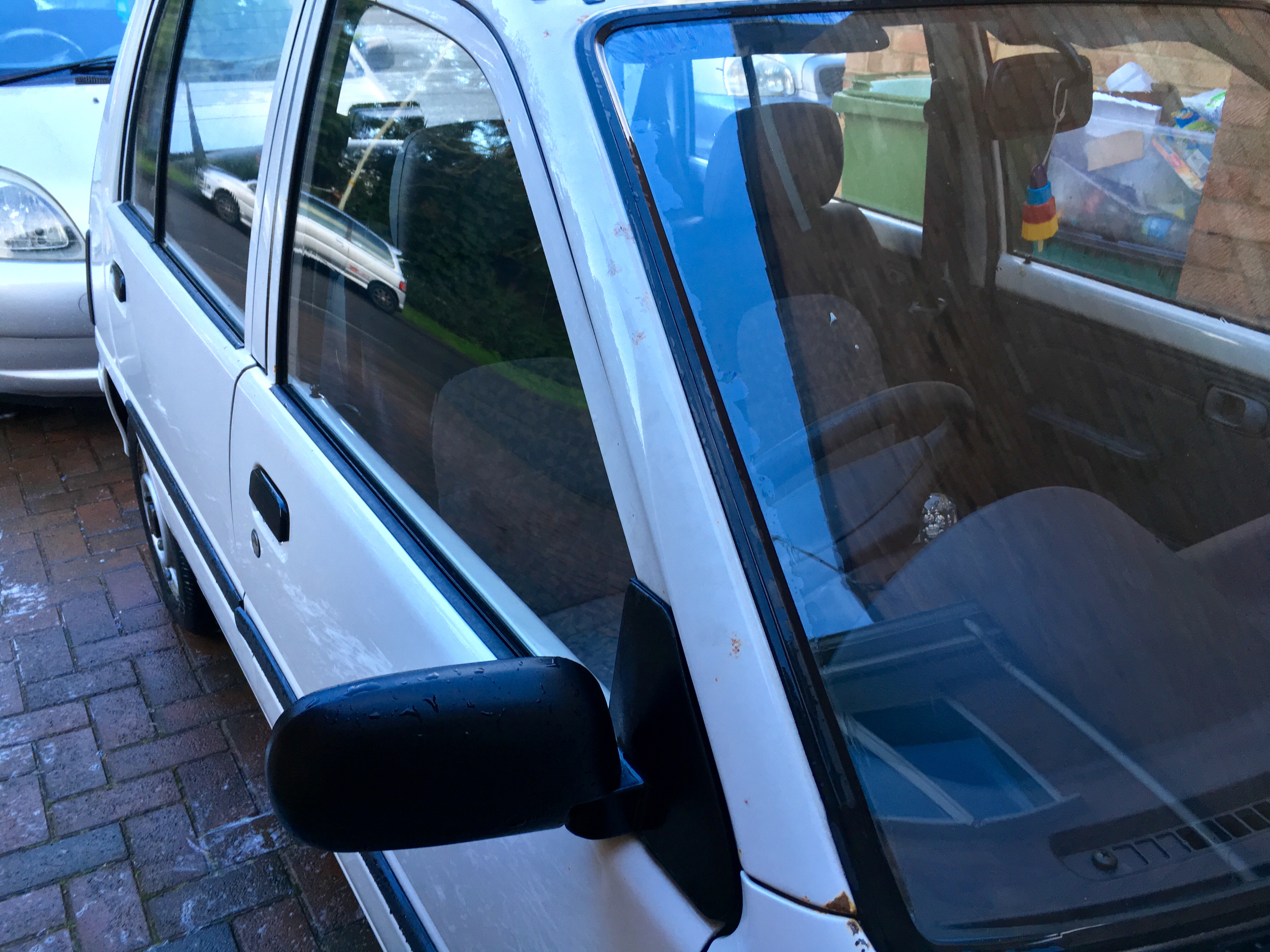 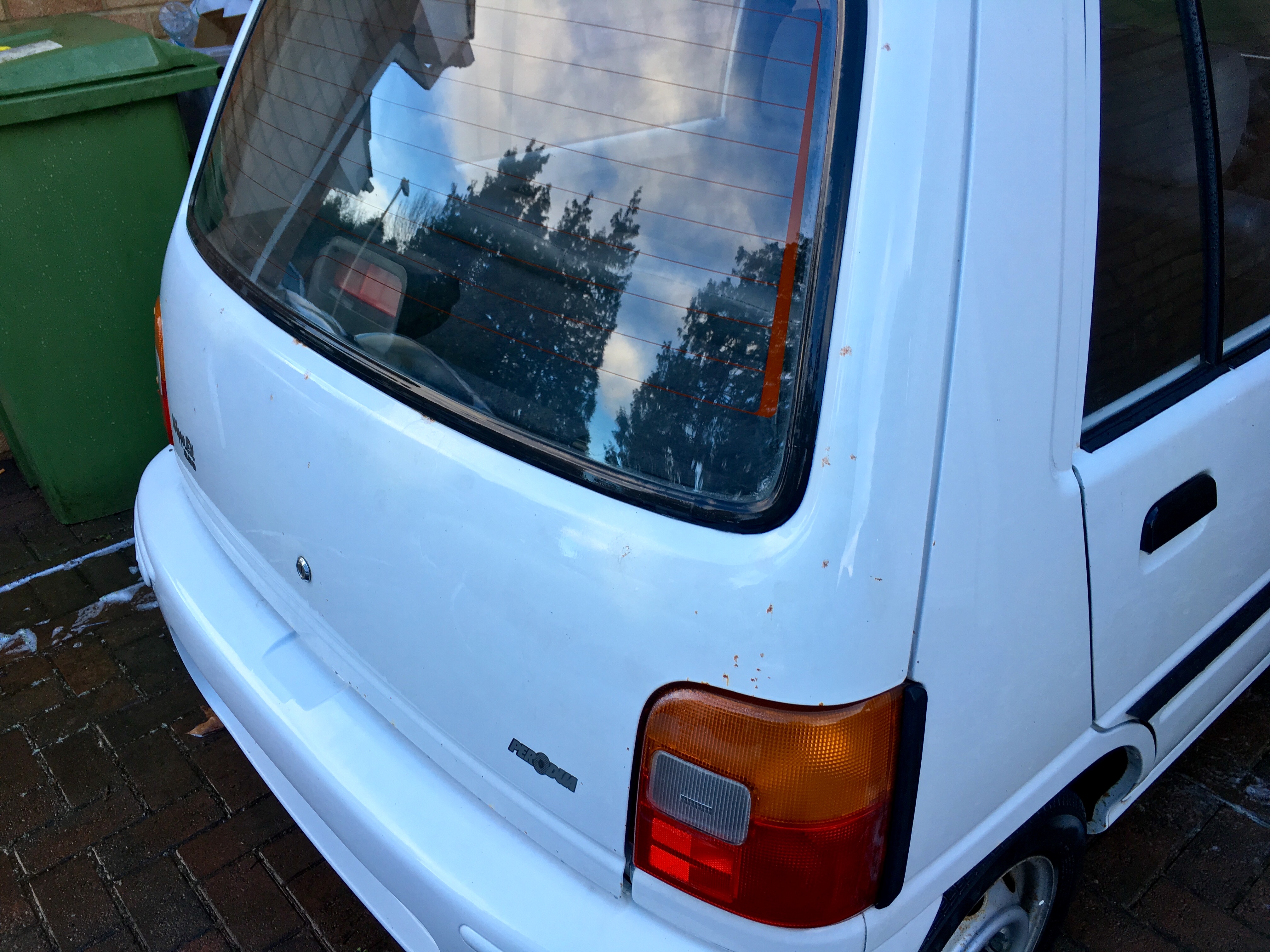 I'm probably going to give the car an abrasive mop all over, just to see if that has any effect. If anyone else has any suggestions for how to get the paintwork looking okay without the need of a respray, I'd love to hear them.

The engine bay looks pretty filthy, too. Going to give it a thorough clean up and degreasing once the weather is a little better. At least the engine is the Daihatsu ED-20 lump, which isn't too difficult to get parts for. 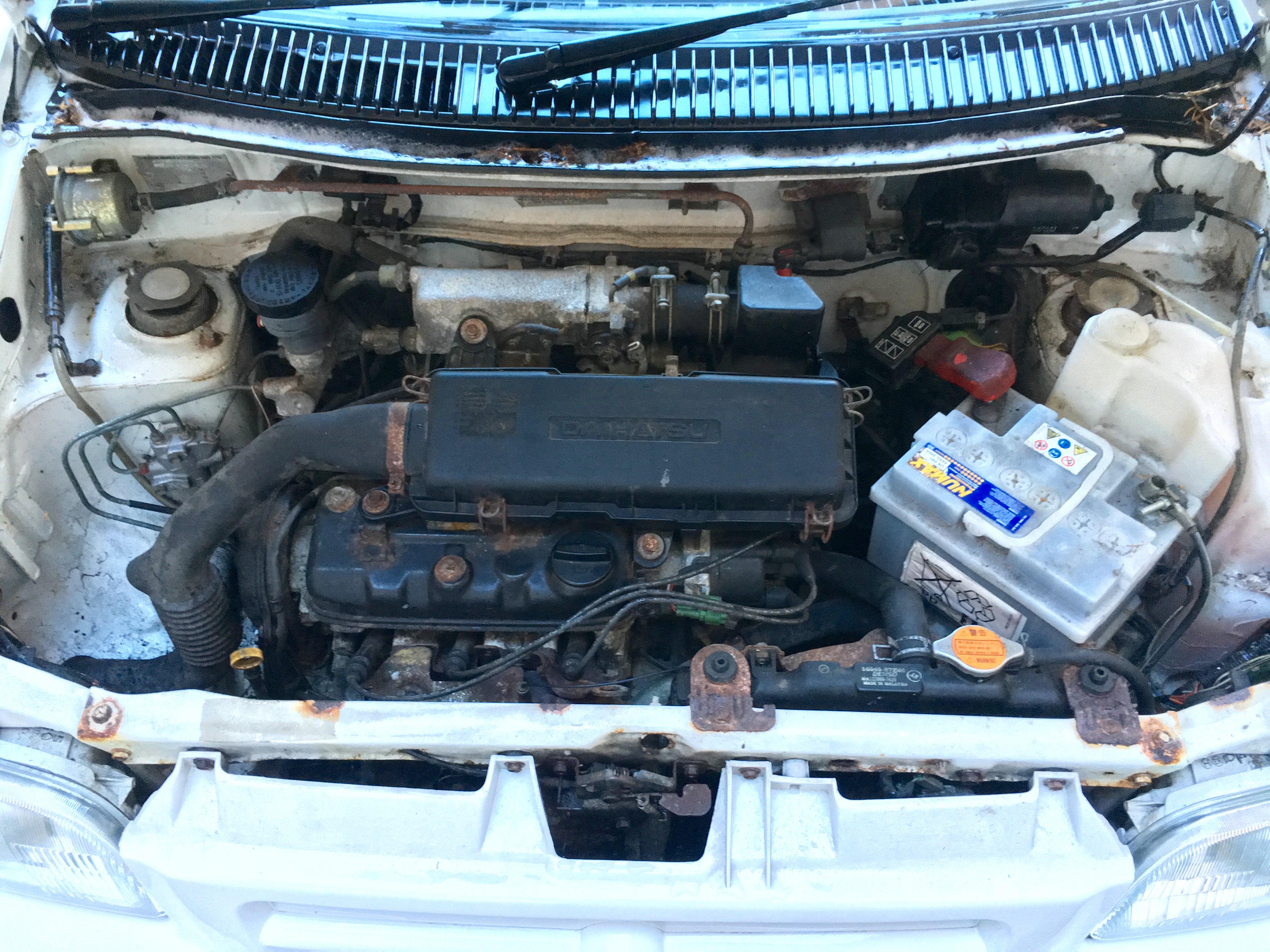 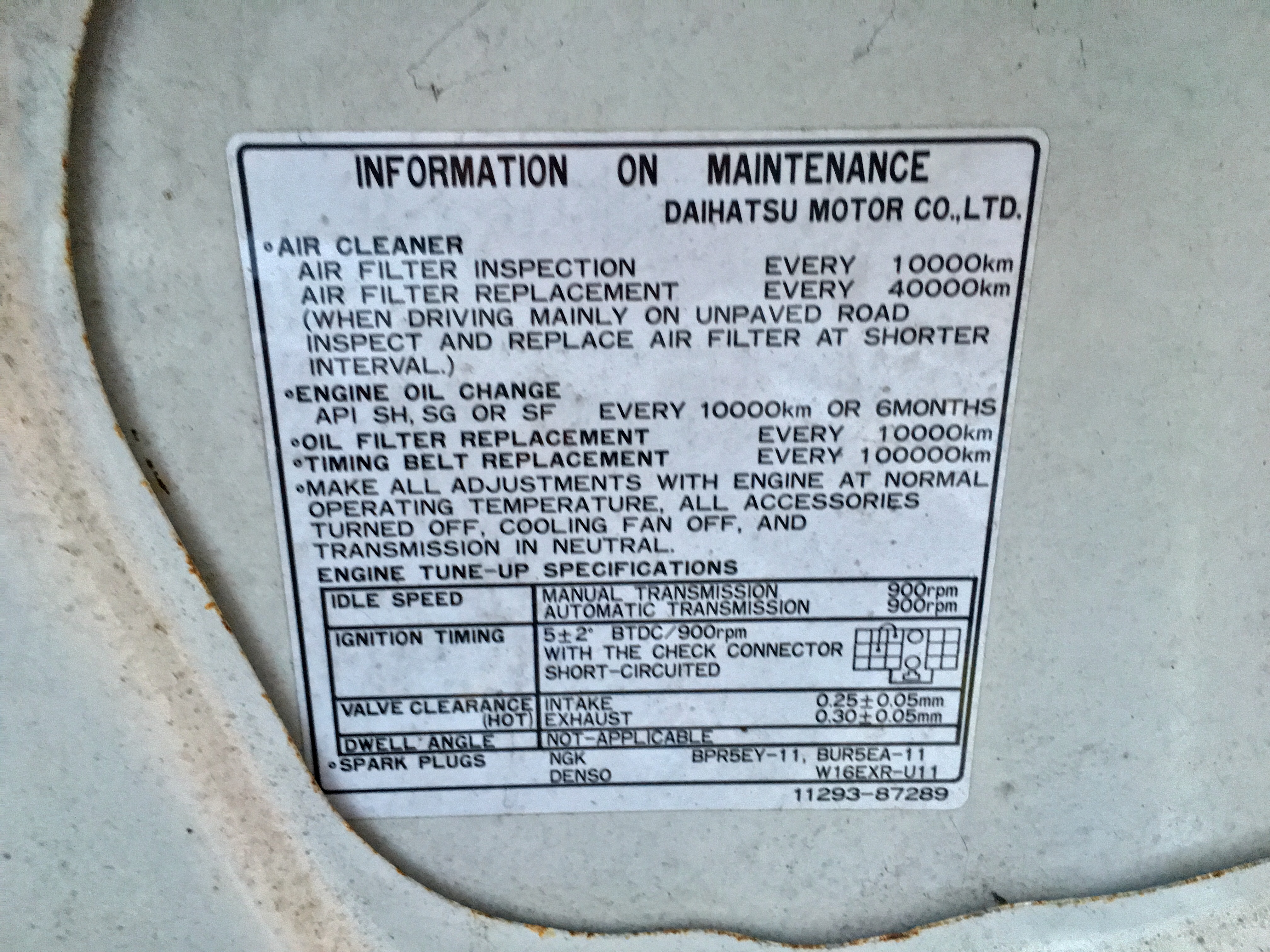 The interior is about as well equipped as a Turkish prison. And it's pretty filthy too. I haven't had a chance to give it a clean yet, but I'm probably have to use quite a bit of car upholstery cleaner on it. No idea what's happened to the driver's seat though, and quite frankly, I don't want to know...

Some new seats might be on the cards in the future, but that all depends on how much I'm willing to spend on it. I've changed the gear knob though, so I guess that's the first mod. 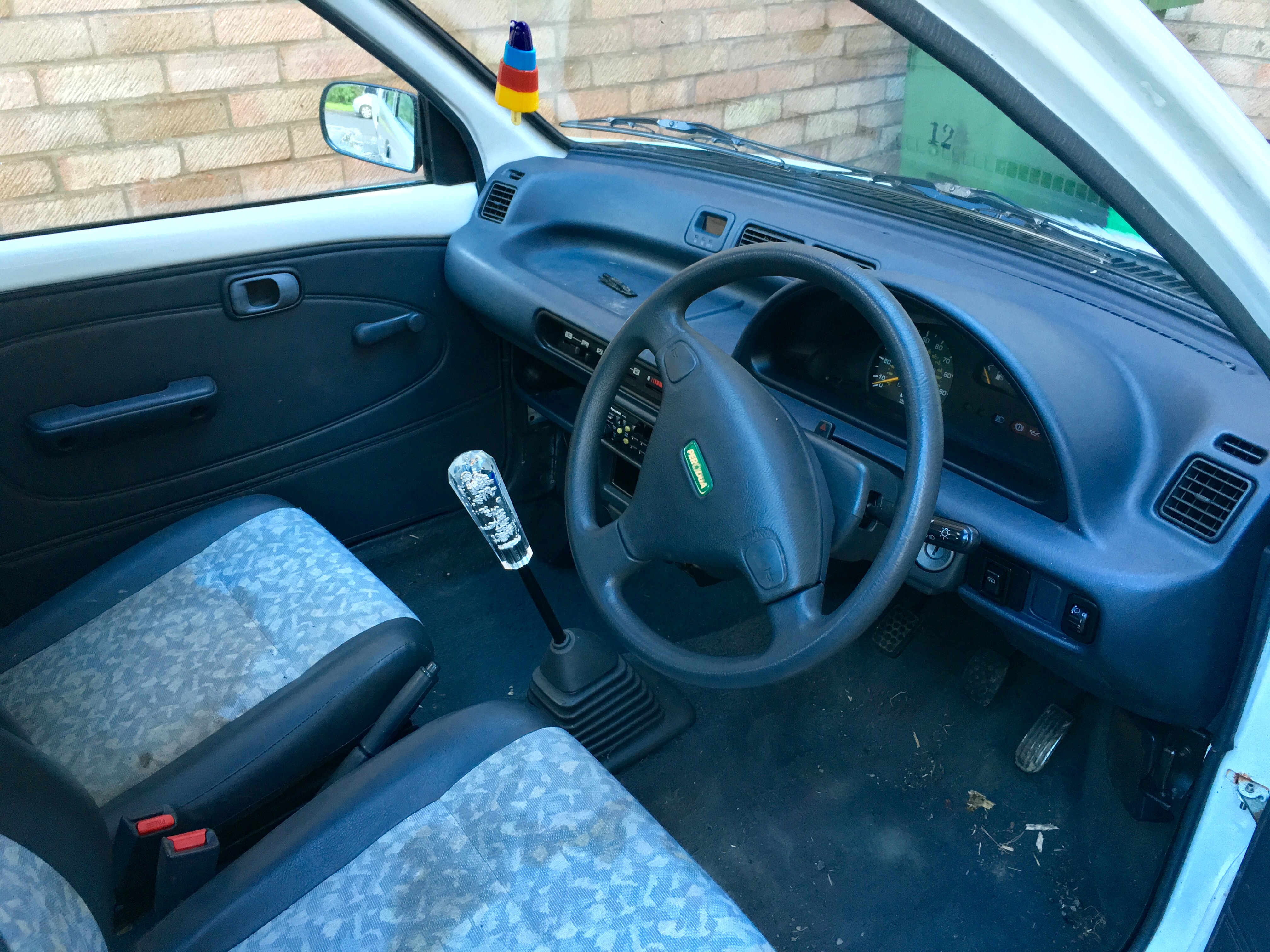 The exhaust has definitely seen better days. The plan is to temporarily weld this one, until either a replacement standard unit is found, or I fork out for a stainless one from Japan. And realistically, there isn't much between them price wise. 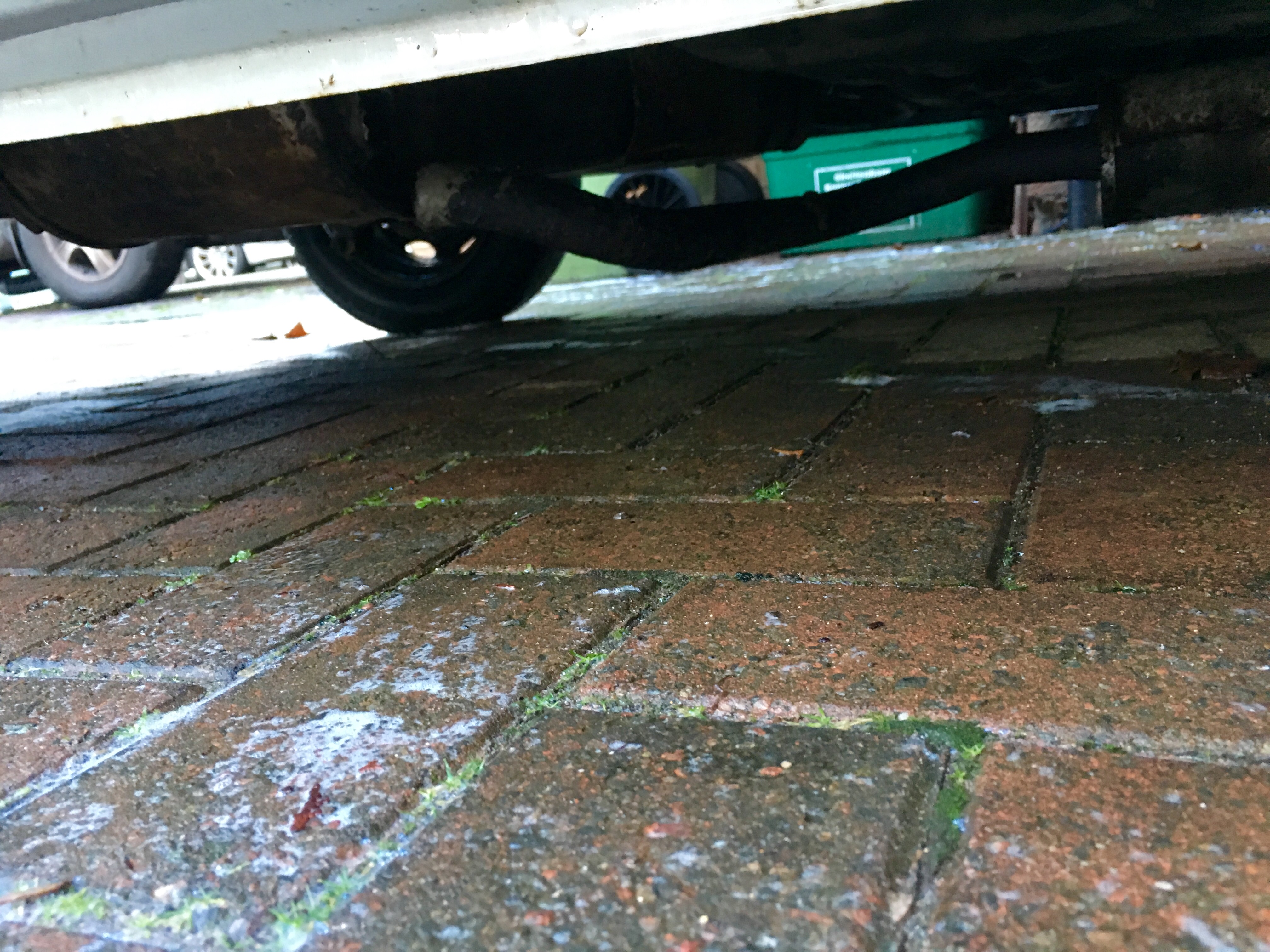 That's about it for now I think. I'm going to be purchasing all of the necessary servicing parts next week and hopefully it'll be back on the road for the first time since September 2006 before the start of February. Should be picking up Scott's Avanzato wheels on Friday as well, so the car will at least look a little better by next weekend.

If they are rust spots no amount of mopping will make that much of a difference probably. If you don't want to repaint vinyl wrap might be worth a thought...

If they are rust spots no amount of mopping will make that much of a difference probably. If you don't want to repaint vinyl wrap might be worth a thought...
Not really a fan of wrapping cars, if I'm honest. I was expecting that a mopping wouldn't do that much, but I'll give it a go anyway I think. The important thing is that the chassis and sills are spot on. I'm aiming for the car to be a reliable daily runaround, so it's okay if it looks a little worse for wear I think. It could possibly end up with a new set of panels, depending on what I decide to do with it. Bonnets, wings, bumpers and even doors are relatively inexpensive from Japan. Postage might be an issue though..