Half-update: I got an email from one of the engine importers yesterday. He forwarded the email from his supplier, which was just, "Yes we can find it the price 1200" So assuming that's USD the price isn't bad at all, but I'm not confident that the supplier was referring to an HA22S K6A from an RS/Z with a manual transmission and not, for example, the K6A from the base model HA22S which didn't have a turbo.

In my research into directing him toward the exact engine that I want, I found that the K6A with VVT head was installed in base model (READ: non turbo) Suzuki Wagon Rs. I can't see any differences between the HA22S turbo engine and the Wagon R non-turbo engine, so maybe they will be acceptable? I'm planning to replace the rotating assembly regardless, so the weak high-compression internals won't be a concern of mine. As long as the blocks are the same (I can say that the engine mount locations are the same) and the heads flow just as well, it shouldn't matter. And on top of that, the turbo Wagon R RRs came with the same FWD 5 speed transmission that I'm looking for, so it shouldn't be difficult to get a transmission after all.

I finally found a price on the overbore piston and stroker crankshaft kit that I've been eyeing. 661,000JPY or $6,100. 830cc would be nice, but no thanks. Fortunately Monster Sport has a 718cc piston and cylinder liner set for $1300, which is much more reasonable. And in the end I might not want the stroker crankshaft because of mean piston speed/redline issues. Now I just need to find a Monster Sport reseller, since they are legendary for being incredibly unfriendly toward international customers.
fxdlidon wrote:

You might find this useful
I got very excited yesterday when you posted this because the 12-pin connector looked very familiar. I finally got a chance to check out my harness again late last night and realized that, in addition to being female like the socket on the radio instead of male as would be required, the similar-looking connector on the chassis harness has 15 pins instead of 12. If that is similar to the factory radio for the AZ-1, then I must be missing a sub-harness that goes from what I have to one or more of those connectors. Do you know what car that guide is for? The frequency ranges shown on the diagram aren't the ones used in Japan. If this radio was shared between the AZ-1 and a USDM car, then getting a radio install harness will be really easy. Semi-related note, do you know of a good source of documentation like this for the AZ-1? I'm going to need a diagram for the ECU when I get to the standalone ECU install.

Do you know what car that guide is for?
That was the radio my AZ-1 came with.
randman2011 wrote:
Semi-related note, do you know of a good source of documentation like this for the AZ-1? I'm going to need a diagram for the ECU when I get to the standalone ECU install.
How's your Japanese?

I was just looking at your gauge cluster. I'm troubleshooting mine as there are no dash lights. Do you know where the bulbs are or which wire is for the dash light? Really appreciate your blog posts!

Sorry for the late response. My cluster was covered in JB Weld this weekend so I couldn't take pictures. In the picture below, the orange dots are the background illumination bulbs. Yellow is +12v and black is GND. The solder spots that I've colored over are a short connecting two separate sections of the circuit. Most are just wires but I think the one closest to the connector on the right is a diode to prevent a ground loop. I'm at work right now so I can't confirm, but for the purposes of investigating cluster illumination, it shouldn't matter. I can figure out which wire in the dash harness is illumination and which are ground when I get home and can look at the harness. 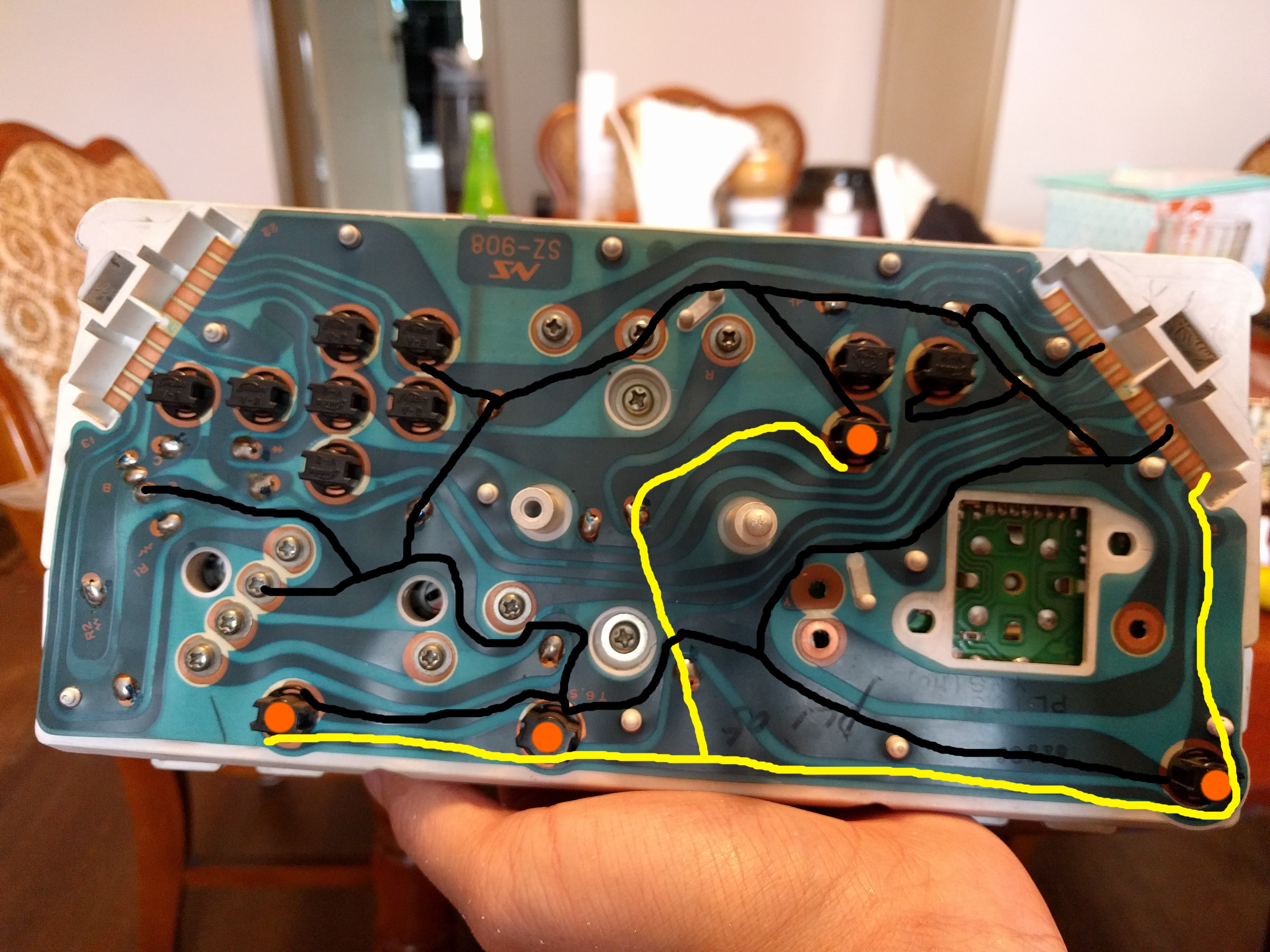 I would expect that a fuse is the culprit if all lights are out. I could translate the fuse box for you if you want, but my only picture of it is covered in unrelated markup so that would have to wait until I get home from work.

EDIT: I should also note that the one central bulb at the bottom of the cluster is what I will call 5mm due to my experience with LEDs. Every other bulb in the cluster, including the ones used for indicators, is what I will call 3mm. Both are standard sizes and I recognize them from my work in my past Eclipses and Miatas. If the illumination bulbs are indeed burnt out, you will need three of the smaller ones and one larger one, and sourcing them would be really easy because they are common bulbs. SuperBrightLEDs has drop-in replacements for both bulbs and I could look up the part numbers if you'd like. I have purchased many of them over the years. Every bulb in the cluster is standard incandescent off-white and the color comes from filters in the cluster housing itself instead of using colored condoms over the bulbs themselves.
Last Edit: 24 Apr 2017 17:35 by randman2011.
The following user(s) said Thank You: nicanor76 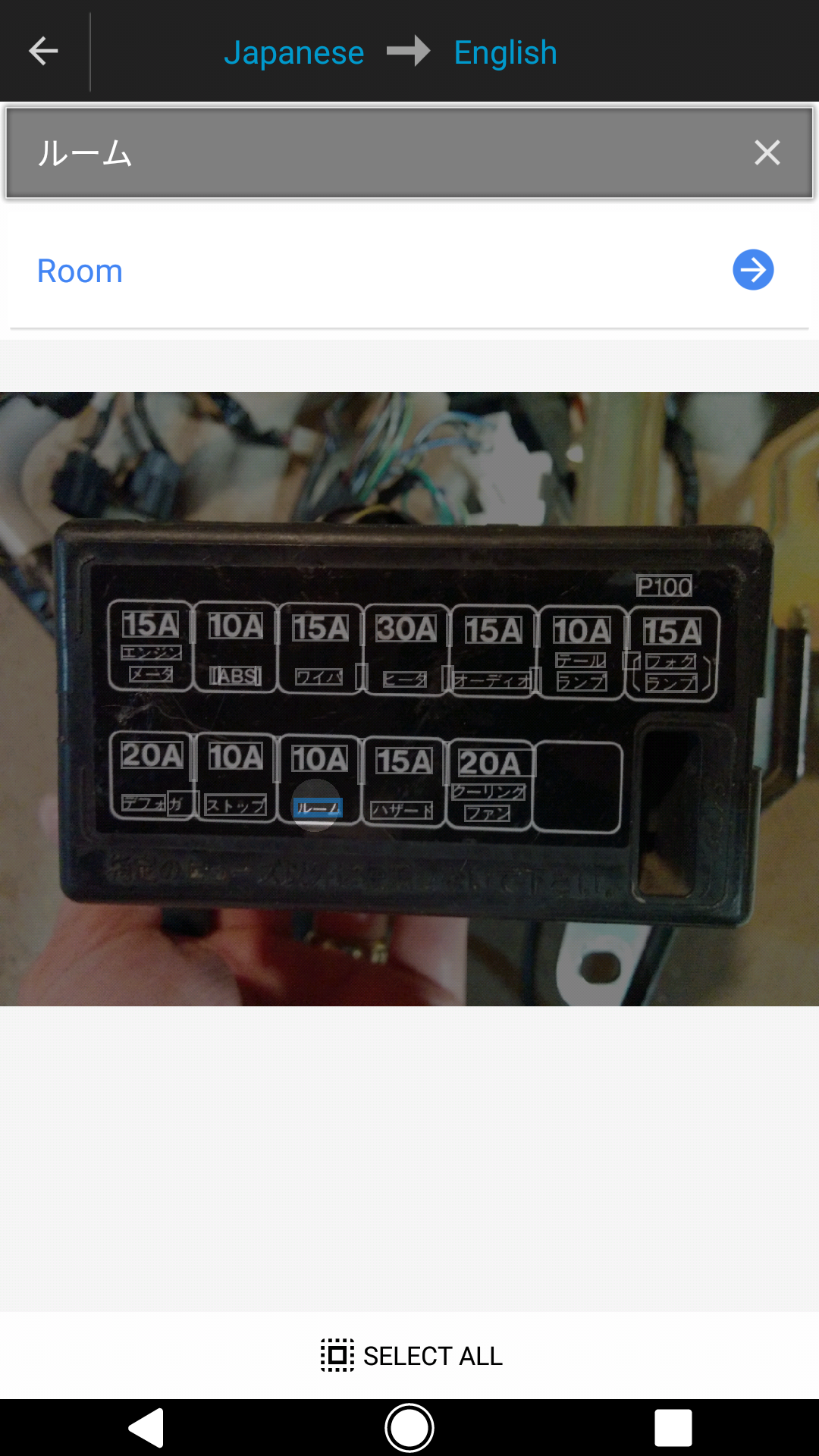 Sorry about that. My phone died last Monday and my replacement phone died last night, so pictures have been really difficult. Interior light fuse is the 10A fuse in the middle of the bottom row.

Thanks for the info! I took my gauge apart and found one of the corners got corroded so a wiring path got cutoff; which knocked out all of the dash lights. I soldered in a bypass wire and it works now. I'll look into the LED bulbs, they're definitely lackluster from the factory.

That's really odd. I have never seen those plastic boards corrode because they're coated on both sides, except for the contacts. If you haven't already, I'd coat your solder joints to prevent them from corroding as well.

For the LEDs, you need 74 type and 194 type bulb replacements. Unfortunately it looks like prices have gone up since I last bought them.

Oh hey, since you're working on your car, would you mind at some point taking the radio out and taking pictures of the dash harness connector(s) and wire colors?

Here's a diagram of the radio wiring

The others are speaker wires

Thanks for that. That will definitely be helpful, but at this point I'm just trying to figure out which of the connectors on the radio diagram that you provided earlier are actually used by the AZ-1. The DIN connector is for a factory amp, which your wiring diagram says the AZ-1 doesn't have. It looks like it will have the separate 1-pin ground connector since neither of the two others will have provisions for GND. I guess the second connector would have to be the 12-pin one because it's the only one with a connection for illumination signal, so it would just have lots of extra empty pins in the AZ-1 application that would normally go to rear speakers the motorized antenna, amp power signal, and whatever TNS is.

Quick internet search says that TNS is used for variable illumination and is a variable resistance to ground signal. Interesting, but not used in aftermarket radios. So I think I have my answer now. I need a harness with a 12-pin connector and the 1-pin connector. Unfortunately those two connectors are mutually exclusive on USDM Mazda, Kia, and Ford vehicles so I will have to get two wiring harness kits instead of just the one. It's unfortunate, but oh well. It's an extra $12 for the one-pin ground connector. That's worth it when the other option is a 3-day road trip in silence.

Thanks for all of these diagrams! Where are you getting them? They're incredibly helpful!

I've just realised why the diagrams are different. The last wiring diagram I posted was for a standard AZ-1, my AZ-1 was originally a Type-L (with the optional sub-woofer) so the wiring and radio would be different to a base model.
I've a copy of the factory wiring diagrams for the AZ-1 but the pages are too big to fit in a normal scanner so to scan it will destroy the manual. I'll see if I can dig out the page for the radio (it should have the plug layouts as well s the wiring colours) it will need translating into English though.
When searching for anything for the AZ-1 don't forget to check for Suzuki common parts, I think the AZ-1 is far more Suzuki parts bin than Mazda, it was a collaboration between them after all.